The Wonderful Art of Eric Carle

Eric Carle is a talented author/illustrator who excites and inspires young readers with bold illustrations and teachable content. Our youngest four children (preschool to fourth grade) enjoyed a week-long study of Eric Carle. In addition to the experiences mentioned below, we completed many of the activities in Check These Out. By the end of the week, each child proudly displayed her book of Eric Carle art which was bound with a strip of fabric. 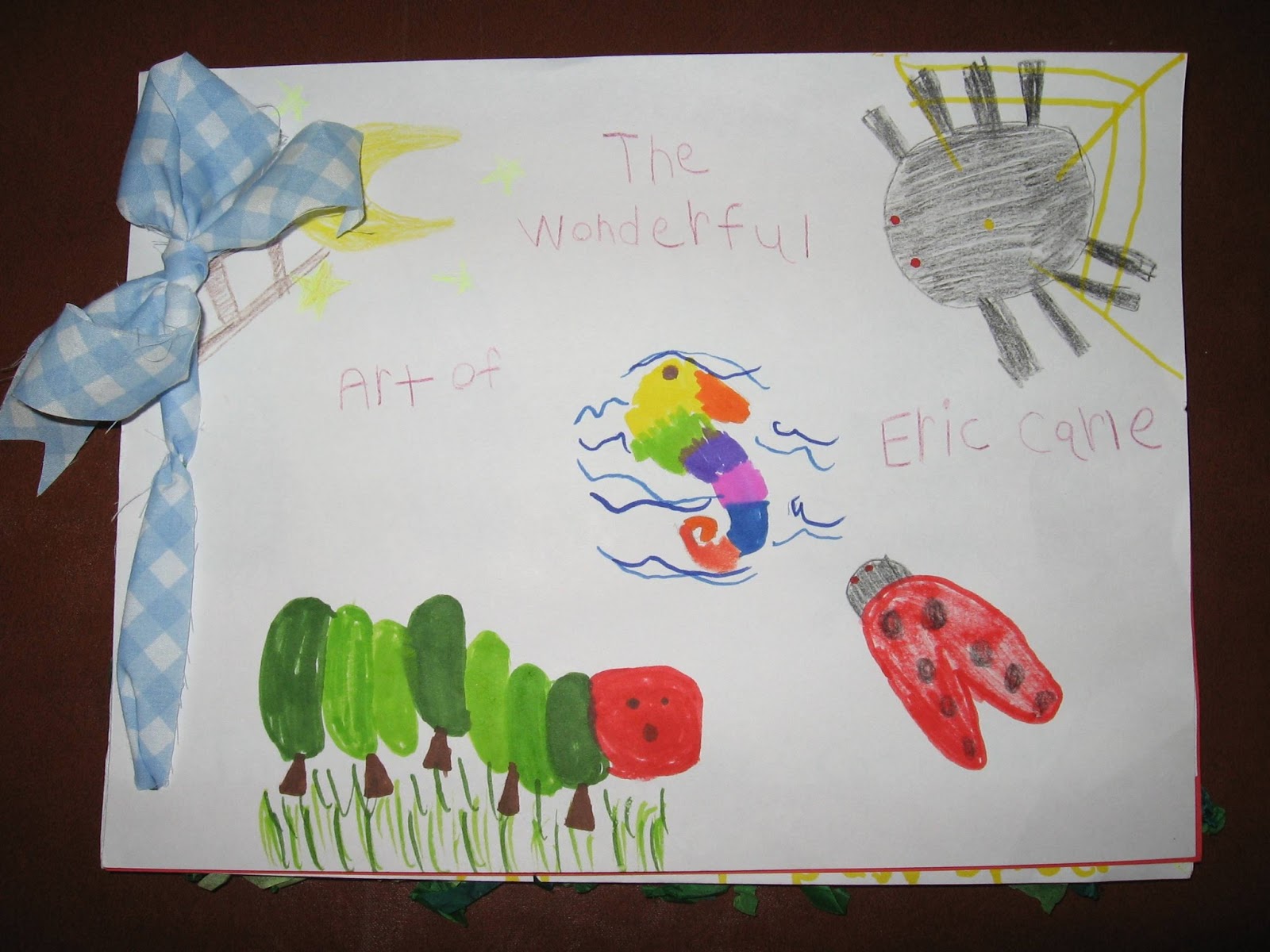 On the first day we re-read The Very Hungry Caterpillar, discussed the life cycle of a butterfly and created our own tissue paper collage caterpillar. We watched a biographical video entitled Eric Carle, Picture Writer, set in his studio. Our children loved learning about the man and story behind the stories.

On the second day we read The Very Busy Spider and discussed the benefits of hard work. Our preschooler made the sounds of the animals and our elementary children discussed the differences between spiders and insects. We all marveled at the raised web on each page of The Very Busy Spider. When it came time to make our own spider page, the fourth grader remembered we had silver glitter glue in the art cabinet, which in her opinion, would make the perfect web. The younger children agreed and soon four very busy spiders were created. On the third day we read The Grouchy Ladybug. We discussed good and bad attitudes, friendship, manners and the power of the spoken word. Our first grader had a quick review of telling time to the hour, with the help of the clock on each page of Eric Carle's book. Older children found the life cycle of the ladybug fascinating. Finally, we made our own ladybugs with wings which opened (thanks to a brass fastener) to reveal the words "thank you".  Google eyes brought life to the ladybug.

On the fourth day we read Papa, Please Get the Moon for Me.  We talked about the phases of the moon and were determined to watch the moon for a whole month to observe the phases.  For the young ones, we discussed the difference between fiction and non-fiction. We concluded that the book was fiction because a ladder would never reach the moon. We then compared the illustrations of the books we had read and created our own fold-out ladder page for our art book. Later that evening we read Mister Seahorse, discussed the sea life featured in the book and the important role parents play in the lives of their children.  We used scraps of tissue paper from the previous days to create a tissue paper seahorse.

On the fifth day we wrote the corresponding book title on each art masterpiece and bound our book by weaving a scrap of fabric through three paper-punched holes.

Our week did not end there! After analyzing and comparing the art of Eric Carle to the work of other artists, we headed back to the library where our youngest ones selected more Eric Carle titles. Our three year old warmly stated, "Eric Carle is my favorite illustrator." Several weeks later, while on yet another visit to the library, I received another surprise.  I mentioned I needed Mister Seahorse. The library volunteer asked, "Who is the author?" Our six year old chimed in, "Eric Carle."

Just what I had hoped!  In addition to the academics learned, our four budding artists were able to identify, compare, and critique illustrations.
Posted by Cheryl at 2:00 PM