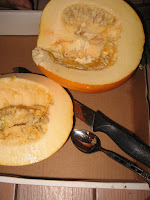 Pumpkin, squash, fall, oh YES!
Everybody's itching for fall. Our family begged me to make pumpkin bread this week. Our mouths watered as it baked. That scrumptious smell of cinnamon. Who could resist cutting the bread as soon as it appeared from the oven? Yummy indeed!
Here is the recipe we use. It is our absolute favorite. I came upon it fifteen or so years ago when my husband brought home the PTA cookbook from his school. Sadly I don't know who submitted the pumpkin bread recipe so I cannot credit the source. If, as you read this blog, you recognize the recipe and know the source, please let me know. Shame not to know the source of our family's favorite!
Pumpkin Bread
3 cups sugar
4 eggs
1 cup oil
1 1/2 teaspoon salt
1 teaspoon cinnamon
1 teaspoon nutmeg
2/3 cup water
2 cups pumpkin
3 1/2 cups flour
2 teaspoons baking soda
Mix all liquid ingredients followed by sugar, salt, cinnamon, nutmeg, pumpkin, flour and baking soda. Pour into greased and floured stem/bundt pan or two loaf pans. Bake at 350 degrees for one hour or until toothpick comes out clean.
*For a sensory experience, we always smell the cinnamon and nutmeg before we add it to the batter. Just something little noses enjoy!
Last evening as I prepared a squash for baking (eventually pureed to make baby food) my children noticed the seeds were smaller versions of the pumpkin seeds they had come to recognize. Discussion grew and eyes widened as we cleaned out the inside of the squash. We compared pumpkin and squash insides, noting they HAD to be members of the same food family if they had the same seeds (smile- kids are so curious). We compared seeds, talked about how each grew, compared the leaves of each plant, and wondered if they would taste similar. The questioning and learning that took place. Warms my heart.
If you are on a fall pumpkin or squash adventure, here are some book links you might find helpful:
Picking Apples and Pumpkins by Amy Hutchings
Seed, Sprout, Pumpkin, Pie by Jill Esbaum
From Seed to Pumpkin by Wendy Pfeffer
The Pumpkin Patch by Elizabeth King
Posted by Cheryl at 7:22 AM 1 comment:

Just thought I would share this great blog find. Abundant information for reading when you have time.
http://www.hsclassroom.net/2010/08/19-everyday-helps-for-a-smoother-homeschool-year/
Posted by Cheryl at 11:52 AM No comments: 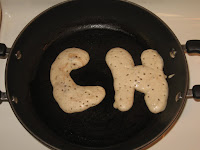 What do "CH" sounds and CHocolate CHip pancakes have in common? Yummy learning!
This morning I ventured to the local grocery for a bag of grapes. Fast forward fifteen minutes into my shopping journey and I found myself dreaming up an engaging learning activity, sure to spark the young ones' curiosities.
Arriving home, I was greeted by three youngers and one older all wondering what was tucked in the grocery bags. To their utter surprise, mom had purchased buy-one-get-one chocolate chip pancake mix. Not the healthiest breakfast choice, but a grocery bargain as well as a catalyst for a morning of learning fun.
We read the box, followed directions, and mixed the ingredients. As I "wrote" in the pan, three pair of eyes gazed eagerly.
"MOM, you wrote a 'C'!"
Yes, indeed! Encouraged by her excitement, I "wrote" another letter.
"MOM, you wrote a 'H'!"
Yes, indeed! We now had two letters bubbling away.
"What sound do they make together?" I inquired. We all made the "CH" sound.
After making a batch of pancakes, we sat to eat. As we enjoyed our yummy CHocolate CHip pancakes we thought of more CH words.
Later in the morning, as I helped the olders with math and language arts, a younger learner cut CH words from the weekly grocery ad, creating a CH meal on a paper plate.
A productive morning indeed!
Posted by Cheryl at 9:59 AM No comments:

There is a little bit of the American Revolution going around. I have several friends working their way through it, others asking about it, and we are in the middle of it, so why not post one blog and help everyone on their journey through the American Revolution?
Rather than learn about the Revolution as a whole this year, we're taking a look at the events from the angles of the men and women who lived it. As a way to tie it together, we are putting all the famous faces on a timeline so the kids can visually see where the people fall in line time-wise. 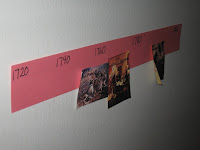 Our timeline. You can see we've just started. In fact, we have two more pictures to add today: Abigail Adams and Martha Washington. A side note- our study and reading about George and Martha Washington made the kids curious about Abraham Lincoln. One of our daughters had read Meet George Washington (Step Up Books series) independently and then borrowed Meet Abraham Lincoln (Step Up Books series) from friends, so when the topic came up, the girls started sharing all they knew about our sixteenth president. Later we read about Annie Oakley somewhere, and well, our history study moved forward to the Civil War. Not sure I was done with all I wanted to study about the Revolution, but intrinsic motivation increases retention, so I decided I would rather move on and have them remember what we are studying. Later this week we will add some Civil War era folks to the time line.
Back to the Revolution. Here are some of the books we enjoyed as we studied those who fought for the independence of our country.
George Washington
Adler, David A., A Picture Book of George Washington 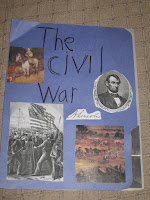